Titanic museum and some Irish "coffees"..

As you can tell, I've gotten a little slack in the blogging field the past two days. Mostly because we went to the BEACH yesterday to see the immigration museum and the BEAUTIFUL St. Colman's Cathedral, so.. can you blame me? But, I'll try and break down the last two days as best as possible. 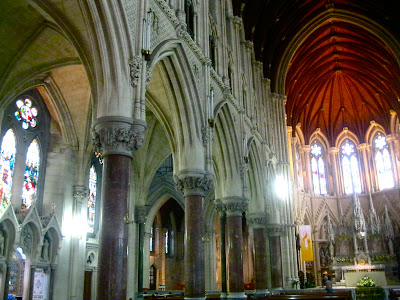 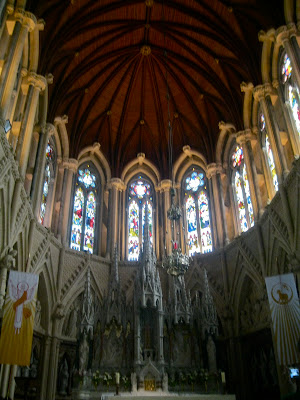 Thursday, our trip went on a day trip to Cobh, Ireland .. the final port of the Titanic. We took a super slow train there and then spent the morning exploring the immigration museum. What I could gather was this, the potato famine screwed over everyone. The poor Irish in the 1800-1900s depended on the potato crop (which if you had 5 acres of you could feed a family of 5 on for 5 years) which completely failed in the early 1900s leading to a massive immigration movement. Everybody wanted a new life and turned to America for help (of course until the German's ruined it for everyone by sinking the Lusatania with American passengers on it). The museum was filled with pictures of the boats and all of the people that left, most of which would never return, saying their goodbyes to family and friends. When we got to the Titanic exhibit, I have to say I found myself a bit emotionally distraught. The first shadowbox I saw was filled with memorabilia of a 19 year old boy that died in the wreck. He had emptied a holy water bottle his mother had given him before he got on the ship and put a "Goodbye all." note in it for his family to hopefully someday receive. When they came to try and rescue the survivors, they found the bottle and were able to get it to his family and now keep it in this museum with his picture. 19.. can you believe that? Trying to start his life over and didn't make it until a mere 19.. I didn't read much more after this one. 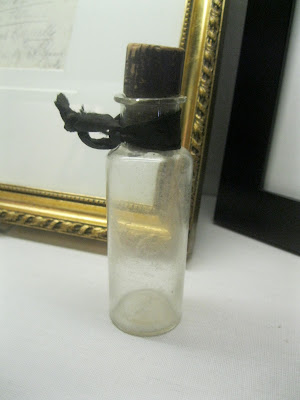 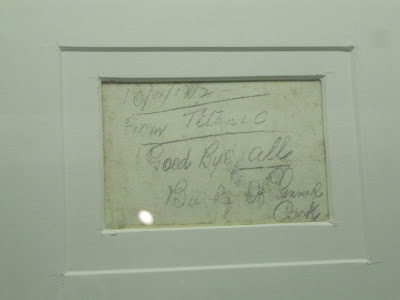 After the museum we got to go see the most amazing Cathedral just rich with history. St. Colman's Cathedral overlooks the Atlantic Ocean from the top of one of the highest hills in Cobh. There are stained glass windows that tell New Testament stories and Old Testament stories intertwined for those that couldn't read in the 1700s and came to this church. The church has mosaic flooring throughout with three leaf clovers (which represent Ireland AND the Trinity), the fleur-de-lis,  and the harp (a national symbol of perseverance - music was banned at one time period and harps were burned and those that played them were killed by the government). We had a very cute older gentlemen play the Carolains for us and took us into the tower that the bells were all kept and let us sit out on the ledge overlooking Cobh. 200 and something steps later, the view was absolutely breathtaking. After that we headed back (not before gelato though of course) and got a few hours off before our pub session. The pub session didn't end up being any good that night so we headed out early and hit the hay. First early night since we've been here! Woohoo! 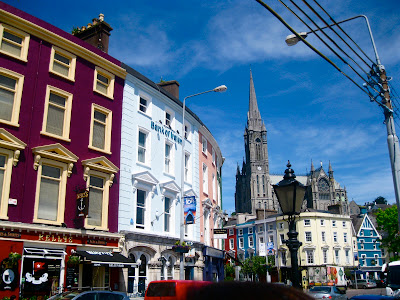 Cobh with St. Colman's Cathedral in the background

Friday marked our last day of classes. Our final class was on the Japanese Gamalan by Mel Mercier. He taught us how to play the COOLEST instrument I've ever seen. It was composed of different sized gongs, drums, and xylophones that you could bang the crap out of and still make beautiful sounds! We had an absolute blast until of course the boring lecture on Irish music that he tried to spice up, but, let's face it.. who wants to sit in a classroom for an hour when you're in IRELAND!? We finished our classes by everyone sitting in a circle and preforming for each other. Alex and I preformed 2 fiddle piece, there were 2 button accordions, 1 bagpiper, 3 singers, and 4 traditional Irish flute players. I have never been so nervous IN MY LIFE! Everyone had a few squeaks here and there which made me feel a lotttt better and I am super glad the whole thing is over. I know realize the extent to which I enjoy music by myself. Playing for an audience ruins the fun for me, I am not much of an entertainer. 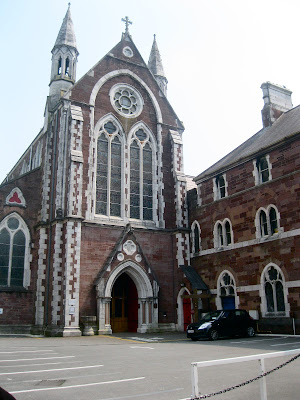 The beautiful UCC music building we've been going to everyday 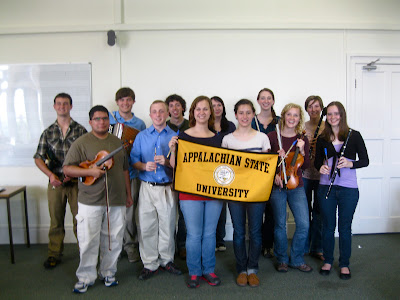 all of us after our final performance

Afterward, we all got super lost and sweated to death trying to find the University College Cork main campus. It was tucked away down a super charming alleyway past a park (that was FULL of students sunbathing) and down like 10 streets of huge, extravagant houses. The buildings were stunning. Everything was rock covered in moss with cute, old doorways and located right on the water. There were weeping willows surrounding the campus and huge glass buildings that were more "modern" feeling. If I could pick any college in the world to go to.. I'd think this would be the one. They're going to have to drag me on the plan Monday. 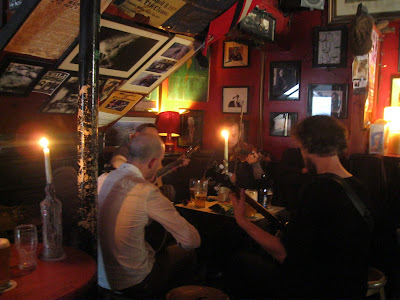 Our pub session was earlier tonight, from 7-9. They asked us to play for THEM when they found out we were music students and they wanted to hear "traditional Appalachian music". Which, by the way, is actually a world-wide known thing and people really love to hear and wish they could play. Hannah and Ben sang "Hallelujah" with a guitar and the entire bar was completely silent. At one point, everyone even joined in.. IN A PUB. It was an absolutely amazing moment that I don't think I'll ever forget. 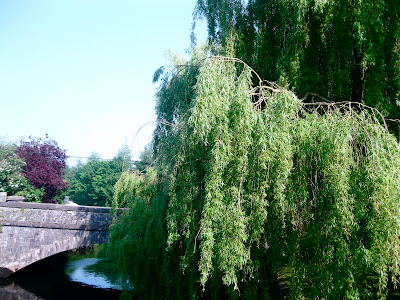 Weeping willow on the water at UCC campus

After that, we all went back to the pub in our hotel and had "Irish Coffee" (Jameson, coffee, homemade whipcream, and one spoon of sugar) and battled all night in an intense game of Hearts. I truly am shocked how close we have all gotten over the past two weeks, everyone here is so friendly and very at peace with themselves. This experience is coming to an end quick, and I'm not sure I'm going to be able to get out of bed without a Murphys sitting in my bed when I get back to the States. I miss you all but WE HAVE TO MOVE HERE!!!!