As I am writing this blog post I am sitting in my bed back in Boone and feel as if two freight trains have hit me smack dab in the middle of the face. Jet lag is no fun people. I mean it! But anyways, I wanted to do a final update on what happened to end my trip with a BANG and all of the many reasons why I believe I should be allowed to live in Ireland. 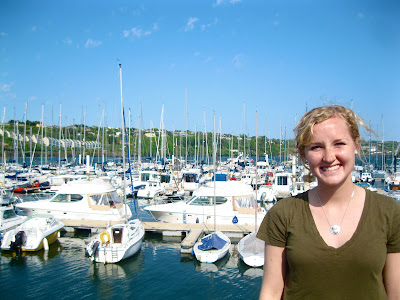 On May 26 we spent the entire day in the most beautiful town in Ireland thus far, Kinsale. Kinsale is a fishing town on the coast and is filled with hole in the wall shops and amazing local seafood restaurants. We go there early in the morning and explored a castle (what else) that was used to keep American and French P.O.W. They used to keep up to 600 men in the same cell at a time, the conditions were - to say the least - barely tolerable. The prisoners were sleeping and living in their own you know what. The castle is now a wine and beer museum (wonderful) so we got to see how most of the Bordeaux French wine makers actually originate from Ireland because of the fail of the potato crop. It was neat to see how the Irish have impacted even something as big and well-known as French wine. 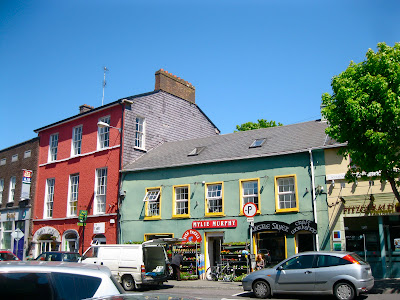 streets of Kinsale facing the water 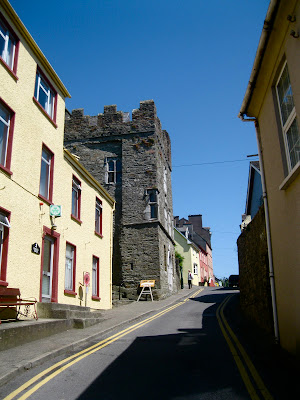 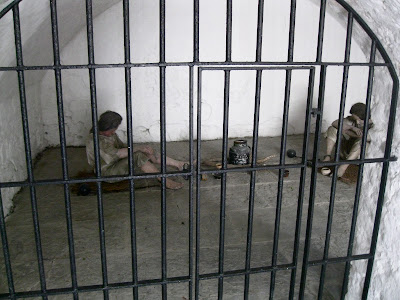 where hundreds of prisoners would be kept.. in this ONE cell

After the wonderful castle, that was randomly placed in the middle of the streets, we had a big seafood chowder lunch in a lovely restaurant right in the heart of the town. There were huge chunks of local salmon in my seafood chowder and I have to say.. I have become a bit of a food quality snot now because of how much the Irish spoil you with fresh foods. There was a side of "brown bread" which I am going to attempt to make this summer in my bread machine because it is the most delicious, decadent, making me hungry as I type this dipping bread ever. We shopped a little and I bought a few history and Irish folk tale books at the Kinsale bookshop. All in all, it was a wonderful beach day that ended with overlooking the sailboats that covered almost every inch of the Atlantic Kinsale is placed on. It makes me want to cry thinking about it, "take me back" reason number 1. 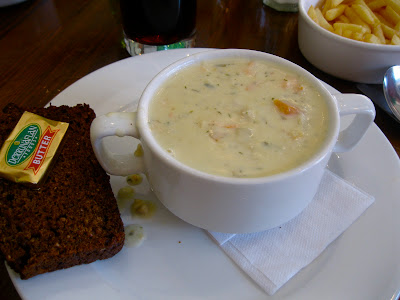 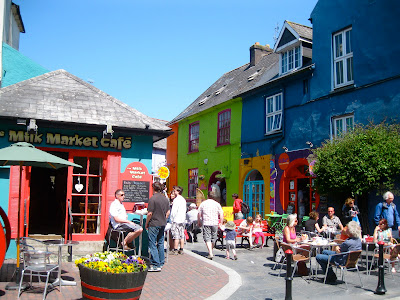 The Milk Market Cafe.. with the best seafood chowder around! 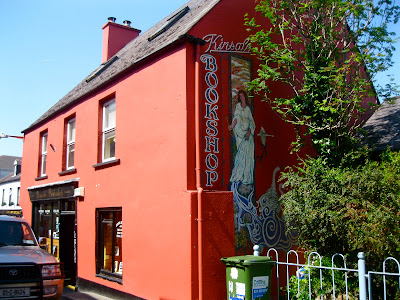 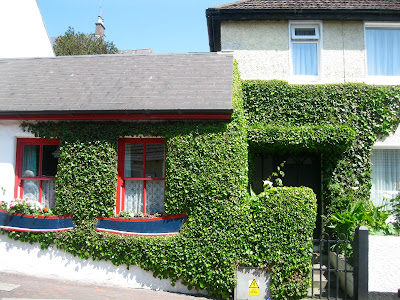 On May 27 we traveled back to Dublin stopping at Youghal (beach on the Irish Sea) and Kilkenny (farmer's market). We took the longest way possible on a bus with no air conditioning in 80 degree weather in order to see all of the cottages and livestock in the countryside. And hey, I'm normally not a complainer but this bus ride was HELL. But, the upside to the detour was that I got to stick my feet in St. George's Channel that leads to the Irish sea and took many, many pictures of cottages in the countryside that would make any person with a soul fall in love with Ireland. It seems as if everyone here farms one thing or another. I have never seen so man free-range cows and sheep in my life. Who knew that free-range farming still existed today, not America. Then we stopped at the Kilkenny farmers market (conveniently located in a STILL FUNCTIONING CASTLE .. what else, once again). I got a delicious homemade brownie and a celtic key-chain and friendship bracelet with Claire. I gotta tell ya', this whole "every bakery item is one euro" thing was about to kill me. I may or may not seem as if I am 300 pounds when you see me later today. No judgmenets, it was vacation. Then, seeing as to we had spent 7 hours on a bus, we got the entire night off! Our group got so close over the past two weeks that even our time "off" is spent talking about life in the pub in our hotel and killing one another's self-confidence in hearts (the card game). 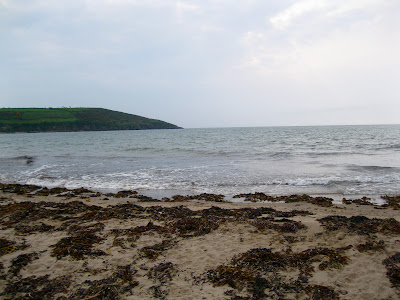 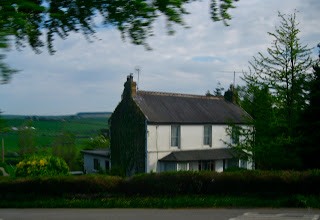 one of my favorite cottages in the countryside.. lace curtains and all 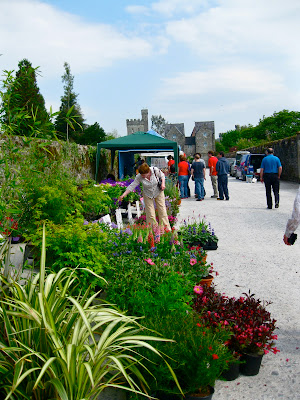 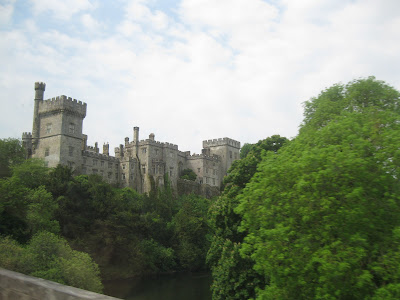 the still inhabited, functioning, castle that the farmer's market is held in the back of

And finally, the dreaded and much-avoided topic of conversation, our last day happened in Dublin, Ireland. I feel like I am talking about a long, lost pet even writing this because my heart is so heavy with all of the great memories and times that I had to cut short because the trip was over. We started the morning by attempting to go to Dublin castle, which is where their president meets and is a still functioning castle, but got denied because our group was too big. Jerks. So instead, we had lunch and self-guided tours of the Guinness factory complete with free pints overlooking the entire city of Dublin. The Guinness factory is shaped like a giant pint glass and has about 8 floors of breaking down the process of creating the wonderful Irish beer, Guinness. At the end of the tour you go up to a 360 degree view of the entire city of Dublin even with the Wicklow mountains, where Guinness' water source is located. It was absolutely stunning. I could have sat up in that bar for days and days and observed the beautiful, buzzing, international city. After being dragged out of the bar at around 3pm (Irish time.. so who really knows the exact time) we ventured to "Christ Church". Christ Church was a church that was first built in 1050 A.D. and was used by vikings for a long time. After the vikings left, royalty moved in. Talk about a culture shock! We got to go inside the church and down in the basement which was found to be the crypt of all the old royal Englishmen that wanted to be buried in the crypt of the church. The royals had mass at Christ Church whenever they came over to Ireland to check on things. We even got to see Bloody Mary's gold plates that she donated to the church with her husband (the King of Orange). Afterward, we did a bit of last minute souvenir shopping and then stuffed our faces with Irish "Boxtys". Which are basically savory crepes stuffed with delicate meats and coated with rich sauces. I had the Irish lamb one of course, which melted in my mouth and I swallowed whole. After dinner, we decided to have one last "hoo-rah" at the pubs on Temple Bar Street. Which is ironically where my Ireland adventures kicked-off on my birthday night. We wound up at the same bar I turned 21 at and sang along with the local band obnoxiously over a few last pints. We discussed all the things we learned about Ireland and joked about how our first impressions were wrong of each other. After a few drinks we mosied our way back home and stayed up chatting until about 3am, to make sure we could sleep on the plane the next day of course. 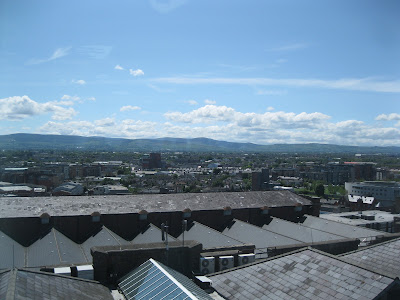 view of the mountains from the penthouse bar in Guinness factory 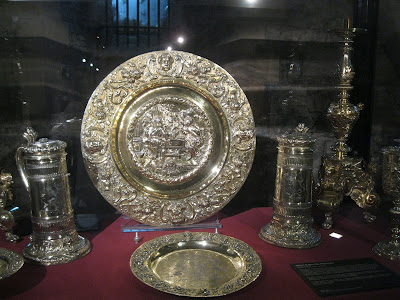 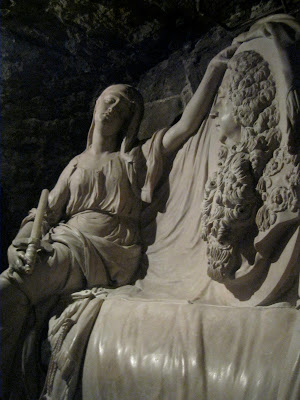 one of the tombs in the crypt 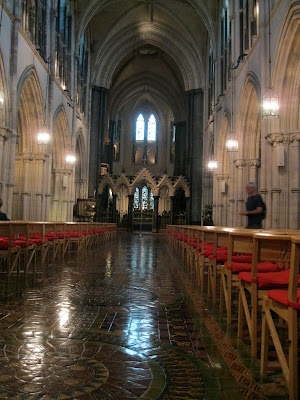 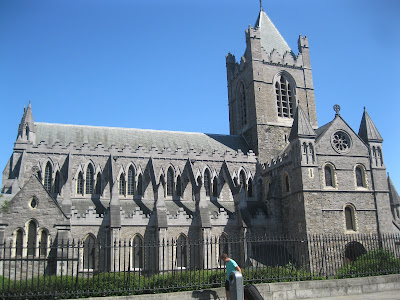 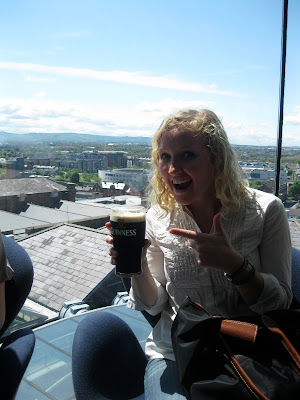 my free pint of Guinness at the top of the tour

At around 7 am, on May 29, our trip members forced us to enter the bus to the airport and 19 hours later had us safely returned to Greensboro airport. The parents were like paparazzi and Alex and I just headed straight for the bus to school, avoiding all good-byes that would be tear-drenched. And that is how, I, Kate Lucas, got back to Boone from Ireland. With force, anger, and many tears. And now, I find myself wishing I had a cold pint of Murphys on my porch in Raleigh that I got to by helicopter to avoid any kind of travel that I will have to partake in today.


So, in conclusion here are a few tidbits I have learned from this AMAZING experience abroad:

-first impressions of people are almost never correct
-The Irish are deeply wounded by the English for the sole fact of they just got their independence not too long ago and are economically fragile on their own. :(
-Ireland has a lot of African travelers that are met with frustration and hostility for the way they treat other travelers
-"Travelers" are my favorite people in the world - they have beautiful hair and never become "settlers" traveling in horse-drawn caravans across the countryside seeking love and friendship and the old Irish ways (the best hippies ever)
-I would like to live in an Irish cottage one day with free-range cows.
-We can't judge the Irish for being upset with the English because we run in fear of the same prejudices against most Muslims because of 9/11 and the stigma we have all attached to that day.
-Beer to the Irish is not about just getting drunk every night, it is a way of boosting their economy and something they (for once) can take pride in knowing they are recognized Internationally for it, and respected for the many, great stouts they produce.
-It is just as hard, if not harder, to find a job here than it is in the United States.
-The Irish LOVEEEE President Obama.
-Irish baked goods are just as good as Italian and French baked goods, but cheaper!
-Irish love sailing.
-People in Ireland (for the most part) do not get braces and therefore are astounded by our straight teeth.
-Pub sessions, which are local musicians getting together to play traditional Irish music over a few pints, were once used as a rebel party meeting before the uprising in 1916, but now are just awesome jam sessions open to the public. Music was once banned by the English and if you were caught playing it your instrument was burned and you were tortured or killed for it because the Queen was afraid they were singing about how terrible she was. They were, of course, but since the Irish weren't free they didn't have the same freedoms they now have today to sing and play music freely. Now, since it wasn't too long ago this was banned, they play all over the streets of Ireland and in pubs every single night and devote their lives to music trying to bring back their old heritage. 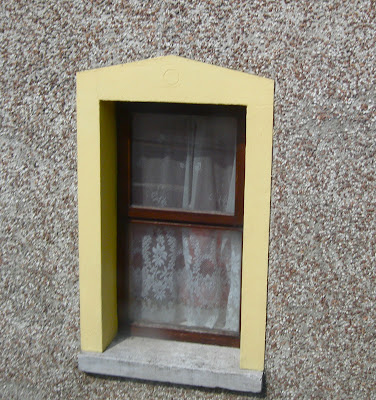 the lace curtains everyone had in Ireland that I envied so badly
Posted by lucaskv at 6:35 AM