penny whistle will be the death of my academic career 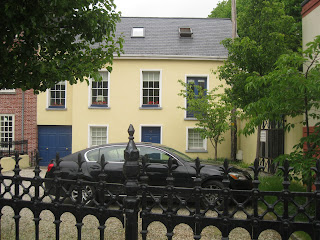 So, today marked the end of my fiddle lessons and penny whistle lessons. Connie O'Connell, a local fiddler from a Killarney cattle farm, taught us a "fling" which is similar to a barn dance, a polka, and a popular slide all of which can be heard at most pub sessions. I taped him playing for later reference and if my internet wasn't so dreadfully slow I would try and post them for you all to hear. He was raised playing his father's fiddle after his father passed away and taught himself how to play by observing people in competition. He never had formal training and ended up learning so quickly and well that he entered himself into the National competition in Dublin and ended up WINNING the entire thing! Only afterwards did the judges comment on how he was holding the fiddle and suggested he learned how to correctly hold his bow. O'Connell went on to play with the legendary Padraig O'Keeffe's students Julia Clifford and Denis Murphy. I'd say that's a pretty credible claim to fame! How insane is that!?  And to think.. in the States we teach mostly classical violin that is so critical on finger placement and the way your instrument is held and handled which doesn't even matter here! You can win with the worst technique and stature and are just judged off of the sounds you can produce. I wish I had taken lessons here long, long ago! :) 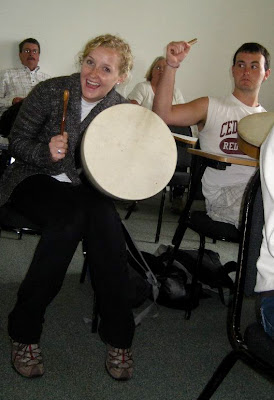 me playing the Bodhran and Ben trying to stab me for my terrible rhythm .. 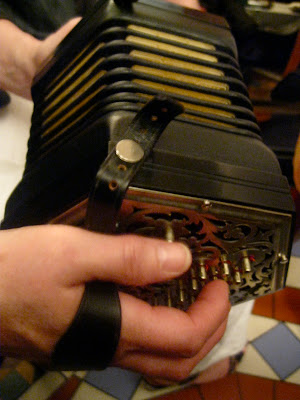 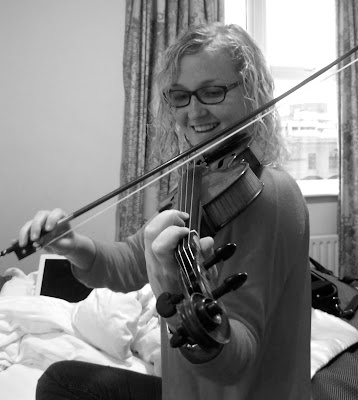 practicing fiddle in our room

Mary Mitchell-Ingoldsby has taught us a total of FIVE tunes on penny whistle: a hornpipe, reel, jig, slide, and polka. She has what you call "ballet" fingers that she constantly taps over her whistle so if she plays in pubs people can't see where her finger placement is in order to steal her tunes. She is incredibly talented and has coordinated almost all of our one-on-one lessons with our teachers. Mary can play the bagpipes, flute, and most whistles (which are similar to recorders). She is well known around Ireland for her style and her teaching of the whistle and bagpipes, her brother was the main bagpipe player in the band at the pub session I loved so much the other night! It's awesome how everyone in the music community here is either related or knows everyone else. Such a small world! On Friday we will all be preforming what we have learned over the course of the week and I have to say.. I have some serious practicing to do before I get anywhere close to wanting to preform in front of everyone. I sound like a dying duck when it comes to the stinkin' penny whistle. 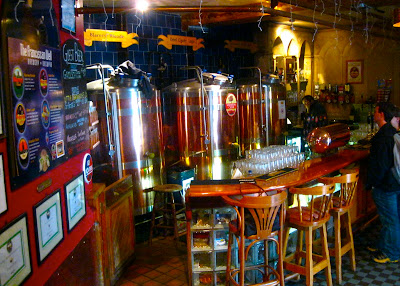 The Franciscan Well pub and brewery

After an extremely dense lecture on the tradition of the Wren that ended at about 3 pm, Hannah, Ben and I ventured out to find the Franciscan Well Brewery near University Cork's campus. Remember that wonderful beer I told you about in my previous post "The Blarney Blonde"? Well, nuns used to brew it as well as "Rebel Red", "Purgatory", and a few other beers in an old convent called "The Franciscan Well". Beers there are extremely cheap and have the richest flavors I have ever had. I tried a new one today that is considered a "German brew", a wheat beer, called "Friar Weisse" that was unfiltered and had a smokey aftertaste. After having a pint or two at the convent (ha), we went through a second-hand crap-hole of a used furniture store and then got lost in the city center of course. My sense of direction is not good in the States or here and it just adds to the fun of being abroad. Luckily, you can trust locals here who will stop you if you are using a map and will give you extremely detailed directions on how to get back to our landmark hotel. But not of course before you stop for some sweets at "Sweet As..." the local sweet shop that makes my mouth water thinking of. All of the sweets are made in shop and come in all sorts of chocolate varieties with caramel, lemon, dark chocolate, orange, and coffee fillings. Today I got a white chocolate coffee tart. Afterward, we stumbled into the local music store "Crowleys" which has all sorts of wonderful instruments, even Concertinas (which look like little accordions but have keys like a piano would that look like light switches), and I found the fiddle book our professor, Matt Crunich, wrote! How cool is that! Now I will be able to come home and play you all some of the tunes he wrote down that are played in pubs! 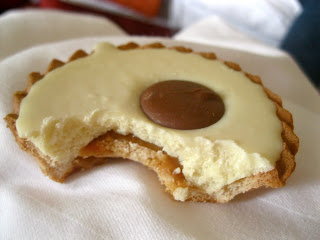 The wonderful white chocolate coffee tart I had from "Sweet as..."

For dinner we tried an AMAZING chicken place.. the Irish version of KFC, Hillbilly's Friend Chicken. Here's the link to the restaurant: http://www.hillbillysfriedchicken.com/ I think it's absolutely hysterical what their version of our food is, they think American's all live on farms and look like their from Texas. The lady at the restaurant got a kick out of some Americans coming in to try their "own" chicken.. which, by the way, is WAY better than any chicken I've ever had in the States. Even their chain, fast-food friend chicken is free-range. Come on United States.. WHAT ARE WE DOING?! The Irish are outdoing us at our own foods now!

If you can't tell by now I have to edit these posts a lot with updates that happen throughout the night and right now I am writing after a pub session and it's 1:09 here and only 8:00 pm in the States. That is why my writing gets progressively worse as these posts progress. But anyways, tonight we watched a session in 'The Gables'. It is a local pub uptown in what looks like a ghetto region, but I did learn a lot of slang from one of the men in the pub tonight and we ended up talking about sailing over some Murphys! Man, life is good!

Anyways, here is some slang that I learned from a local West Cork sailor (all quotes and examples are from him):

feen = boy
boroeu = girl
lagger = jerk (dick); or someone is drunk ... used in a sentence "Stop being a f***** lagger" or "Lad.. cut it out you are lagger"
gatt = alcoholic drinks
posh = someone that pretends to be rich but isn't (comes from back when the rich Irish owned a lot of sailboats and would wave goodbye from the port side of the boat and then would be homebound and wave hello from the starboard part of the boat. Posh = po - port side sh - starboard homebound
garda = police (or pigs they like to say)

Still to come:
-trip to Cobh, Ireland (the last port of the Titanic) and it's immigration museum - TOMORROW!
-Kinsale - a fishing town on the coast & it's beaches
-our final concert on Friday afternoon with all that we've learned so far (yikes)
-Gamelan lessons (drums and xylophones from Africa)
-a trip back to Dublin to see the oldest book ever written.. "The Book of Kells" which was written were Vikings were still around!